When I was a kid it was a different world. I remember things that will never be seen again, like answering machines, rotary phones, and kids riding in the back of car windows. One of the images that stayed with me from that era is dogs tethered in back yards.They were everywhere, and it was easy to spot which dogs were young and new and which dogs were older and experienced. 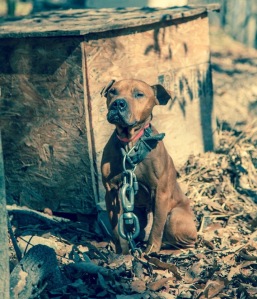 My friends and I would ride past a home on our bikes and a dog would bark and run and choke itself at the end of its chain trying to run with us. It would become agitated and get its leash knotted and tangled around trees and grills and other backyard bric-a-brac. They would pull, tug, and strain because the truth hadn’t sunk in yet. The older dogs, they knew.

It was almost sad to watch the dogs that had been tied down for awhile. After a year or so of riding past the same house and the same dog… the chasing and the barking slowly just tapered off. Next to the new dogs, the older dogs had an almost “beaten” look to them. They seem consigned to their fate, and what might be called obedience seemed more like the dog just finally realizing that it wasn’t free anymore. It was someone’s pet. Tethered.

Tethered was the word I settled on when I was trying to figure out this feeling that I have from time to time–and I think all men have–when they enter new life stages.

It started when I got married. I was used to being able to do what I wanted, when I wanted, where I wanted. I didn’t worry about things like insurance or even my own injury or death because if I died there was no one who relied on me. I’m sure there would have been a few people sad to see me go–namely my mother–but I would not have left anyone behind I was responsible for. My life was completely free. Free to take adventures. Free to risk it all. Free.

Then I got married and that all changed. It was long leash and really Charissa is so beautiful and capable that if something were to happen to me she would be fine. But still… I found myself gravitating toward her in crowded rooms. I wanted to stand next to her, work along side her, and spend time with her. At the same time I battled for alone time and would rebel in my mind by fantasizing about what adventures I would take, what things I would chase or where I would wander if I wasn’t “tied down.”

Then everything changed again when our first baby girl was born. Charissa and I were fostering and I was growing to love those girls but the bond with my own biological child was different. When Genevieve came into the world it was like gravity itself shifted.

As I grew to love our foster girls (who are now my adopted daughters), continued loving Charissa, and became more wrapped around Evie’s little finger… I started to feel it again. It started to feel like I was a wild animal that was chained. 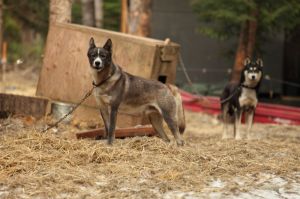 It felt like each addition to my life came equipped with a brand new bit and bridle. The responsibilities… the pressure to provide… I couldn’t go where I wanted when I wanted because there were nap times, drop offs, pick ups, doctor appointments, meals to be made, etc. I bought life insurance and I didn’t take certain trips or even certain risks because I had people waiting for me at home. I was a dog on not one leash, but four.

I think this is why men have midlife crises or up and leave their families. I have never hated my life or resented my family. There were just days that I would wake up and feel the full weight of it all. It felt like I was straining and choking and breaking until I would just be one of those dogs who is super loyal, but all the fight has gone out. It is scary to think your adventures are limited to what surprise awaits you in the next diaper.

I actually started writing this blog post over a year ago when we found out we were pregnant again… but I wasn’t ready. God had to reveal something to me that changed the way I look at our family.

I was praying about this feeling choking my spirit and God revealed to me a picture of that old game from camp: tether ball.

It was a classic game with a ball on the end of a rope that no matter what happened it wasn’t going anywhere. You’d hit it, kick it… it would just wrap tighter around that pole. That picture brought to my mind a time when I was a young student at sleep-a-way camp. I played a game of tether ball with some other campers, but we had hooked multiple ropes and balls to one pole. It was chaos. But it was fun. And that is when God spoke to me and told me… I’m not the ball or the dog or the leash, or the rope. I am the anchor.

I started to think about some of the most memorable moments of my childhood. They weren’t when I was on an adventure alone. They were when my Dad took me on a ride on the back of his motorcycle. Tagging along with my big brother. Going with my mom when she went grocery shopping and stopping for a special treat afterward. What sticks out in my mind like bright lights are road trips with friends and family vacations that weren’t smooth operations but just tangled up fun.

Which led me to notice my own children. Charissa and I are constantly frustrated they can’t play on their own but… my girls are at their best when they are tethered to me.

This past weekend, our church held a carnival for the community. My daughters had more fun setting up, tearing down, handing out popsicles, and helping me feed hungry guests than they had riding rides and playing games. In my orbit they were safe. They had an example to follow and we had an adventure together and made memories that the rides alone could not provide. This realization helped me restore my sense of gravity and even though I still feel a pull toward my family, I make sure they are the ones tethered to me. They come to me for wisdom. They come closer to me when they get hit or kicked. And we can have wild fun because no matter what we are bound together.

I never realized before that I am tethered to each of my daughters, and my wife… but I’m NOT TIED DOWN… I am the anchor. I don’t have to pass up adventure. I just take them with me. Sure it is messy. Sure it is noisy. It is obviously a little annoying to have these crazy, smelly, loud objects in my orbit. I definitely have to be prepared and pack diapers and snacks. But I am not tied down. I don’t feel beaten down or like I have to give up. I don’t deny myself adventures. Sometimes I have to give up my chicken nuggets to hungry girls… but adventures are more fun when I am not alone.