If you know what a “Bard” is then I greet you as a fellow nerd… Live long and prosper. If not, then the stories of Saul and Samuel must seem very strange you to you indeed.

Sometimes we lose the richness of the Old Testament because the tribal system of the ancient Israelites is so different from our “civilized” existence. After all, for hundreds of years this tribe, this family who became a nation existed without any form of monarchy or formalized government. They didn’t have a ruler. They had morality, religion and the representatives of God that He would raise up as was needed: priests, prophets, war leaders and judges. 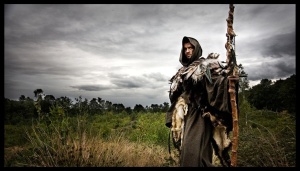 These leaders had more similarities to celtic lords and their bards then they do to modern pastors or presidents. A bard was a prophet of sorts. The bard was the voice of God and held the kingship to pass (not from father to son) to any worthy man chosen. The bard would advise the king and uphold the people with prayer and miracles. The bard was not under the king’s authority because the bard’s authority came from God and often it was his job to rebuke the king and provide accountability.

Samuel functioned in much the same way. Before Saul’s reign, the priests and prophets shepherded the people and when the time came for a king Samuel was the one who bestowed sovereignty to Saul. It was Samuel’s job, not to serve Saul, but to push him to be the best and most holy king that he could be.

On the other side of this coin is the king, Saul. His reign was doomed before it began. God had declaimed that if his people wanted a dictator then he would provide one for them. Saul was chosen by God but he was not chosen by the merit of what God wanted, but by the qualifications set in the hearts of the people. Kingship is a physical and spiritual relationship between the King, the land, and the people.

The myths of the land going sour when an evil king rules are rooted in some truth. When a good king reigns, he does not store up treasure because his treasure is his people. He is good and generous, so his people prosper and are able to work the land so the land itself prospers.

He protects from enemies and dispenses justice. The Israelites saw no greater prosperity than when they had no flawed earthly king, but when the King of Heaven on his throne built into the Ark of the Covenant reigned in Israel. After all, with a flawed king comes a flawed reign and a broken land. The beginning of the kingdom of Israel and not the nation of Israel… that was the beginning of the end.

Let it be a lesson to all who have forgotten what “kingship” and “sovereignty” truly means. When we look to lift a person over us to lord over us the only thing that will come of it is oppression and calamity. Until God reigns and his people obey him because they hold him King of their hearts (and not because we are living under the threat of law) our land will never heal.